Le Marche is a region in the middle of Italy. In the north it is connected to Emilia-Romagna and the Republic of San Marino. To the west are Tuscany and Umbria and in the southeast the Abruzzo and Lazio. The entire eastern boundary is being formed by the Adriatic.
Le Marche covers about 3,2% of the total territory of Italy and is the fourtheens biggest of all Italian regions. From every 1000 Italians, 25 live in Le Marche, 2,5% of the total population.
In Le Marche there is no masstourism yet, but more likely 'agrotourism' (agriturismo), by which guests stay at (former) farms. In Le Marche you can still enjoy very good and payable (slow) food and drinks, visit unspoilt and quiet beautiful old (medieval) cities, go to calm beaches and/or go hiking or biking in the mountains.

Up to 30 years ago Marche was considered a rather poor region, although economically stable in some sectors, thanks particularly to its agricultural output and to the contribution of traditional crafts. Today the contribution of agriculture to the economy of the region is less significant and the gross value generated by this sector remains slightly above the national average. The main products are cereals, vegetables, animal products and grapes. In spite of the marine impoverishment, the sea has always furnished a plentiful supply of fish, the main fishing centres being Ancona, San Benedetto del Tronto, Fano and Civitanova Marche.
In the last 30 years the economy of Le Marche has been radically transformed, without however repudiating its rural past. Many of the small craft workshops scattered throughout the rural settlements have modernised and become small businesses, some of which have become major brands known all over the world (Indesit, Tod's, Guzzini, Teuco). This evolution led to the emergence of 'specialised' industrial areas, which are still profitable: footwear and leather goods in a large area straddling the provinces of Macerata and Fermo; furniture in the Pesaro area in particular; household appliances and textile industry in the province of Ancona, in which the main engineering companies are also to be found (including ship building, petrochemicals and paper, as well as consumer durables). The region continues to draw tourists, whose increasing numbers have been attracted by the rich and broadly distributed heritage of history and monuments, as well as by the traditional seaside resorts.

Before the occupation by the Romans the region was inhabitated by Piceni, one of the Italic tribes that had setteled in this hilly region towards the end of the second millennium B.C., and the Senonic Gauls. It was conquered by the Romans after the Battle of Sentinum in 295 BC. The Romans founded numerous colonies in the areas, connecting them to Rome by the Via Flaminia and the Via Salaria. The Roman Emperor Augustus kept calling it Picenum, after the original inhabitantes. Ten centuries later the name Marche came up derived from the Germanic word Mark, that mend border: region at the border.
After the fall of the Western Roman Empire, the region was invaded by the Goths. After the Gothic War, it was part of the Byzantine Exarchate of Ravenna (Ancona, Fano, Pesaro, Rimini, and Senigallia forming the so-called Pentapolis). After the fall of the Exarchate it was briefly in the possession of the Lombards, but was conquered by Charlemagne in the late eighth century. In the ninth to eleventh centuries the marches of Camerino, Fermo and Ancona were created, hence the modern name.

Marche was nominally part of the Papal States, but most of the territory was under local lords, while the major cities ruled themselves as free communes. During the Renaissance, the region was fought over by rival aristocratic families, such as the Malatesta of Rimini, Pesaro, Fano and the house of Montefeltro of Urbino. The last independent entity, the Duchy of Urbino, was dissolved in 1631, and from then on, Marche was firmly part of the Papal States except during the Napoleonic period. After Napoleon's defeat, Marche returned to Papal rule until November 4, 1860, when it was annexed to the unified Kingdom of Italy by a plebiscite.
In the 19th century a new railwaytrack from Bologna to Brindisi, connected the coast-line of Le Marche with the rest of the country; a big improvement compaired to the times before, when the region was only accessible via very difficult and bad road over mountainpasses.
The capitol of Le Marche is Ancona, the only important big harbour of Le Marche, with among others many ferries to countries on the other site of the Adriatico, like Croatia and Greece.
The region excists of five provinces: Ancona, Ascoli Piceno, Fermo, Macerata and Pesaro-Urbino. Main cities in Le Marche are: Pesaro, Urbino, Fano, Senigallia, Ancona, Jesi, Fabriano, Loreto, Marcerata, Recanati, Civitanova Marche, Fermo, Porto San Giorgio, San Benedetto del Tronto and Ascoli Piceno. 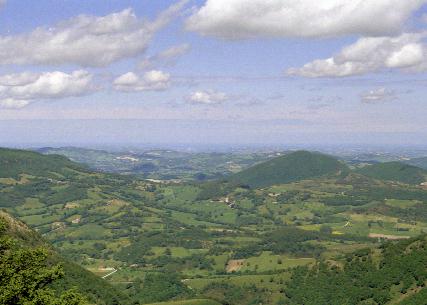 Most of the region is mountainous or hilly, the main features being the Apennine chain along the internal boundary and an extensive system of hills descending towards the Adriatic. With the sole exception of Monte Vettore in the south, 2,476 m high, the mountains do not exceed 2,400 m. The Monte Vettore is part of the Monti Sibillini, a National Parc with erratic mountaintops and vast highplains where big hurdes of sheep graze. In the north of Le Marche there are two other regional parcs and the highest mountains are the Monte Catria (1,701 m) The Monte Acuto, and the Monte Nero. In the regional parc Gola di Rossa are the Caves of Frasassi, a major attraction. Besides the national and regional parcs there are some smaller nature reserves also worth while visiting, with more then a hunderd flower- and forestareas where you can stumble into herds of wild horses.

The coastal area is 173 km long and is a relatively flat and straight except for the hilly area between Gabicce and Pesaro in the north (Monte San Bartolo), and the eastern slopes of Monte Conero near Ancona. In between the landscape is hilly and mainly occupied by agriculture. Main products: wine, olives and fruits. This hilly area covers two-thirds of the region and is interrupted by wide gullies with numerous - albeit short - rivers and by alluvial plains perpendicular to the principal chain. The parallel mountain chains contain deep river gorges, the best known being those of the Furlo, the Rossa and the Frasassi.

Le Marche is a region with a incredible rich history, where many religious traditions and arts have survived. There are beautiful old coastal towns like Fano and Senigallia, and historicaly important university towns like Urbino, Marcerata and Ascoli Piceno.
Le Marche also has innumerable archelogical excavations and beautiful musea, with the Palazzo Ducale in Urbino as one of the main highligts. Also other historicaly important cities like Arezzo (in Tuscany) and Gubbio, Perugia, Assisi and Spello (in Umbria) are easy and relatively quickly to reach.